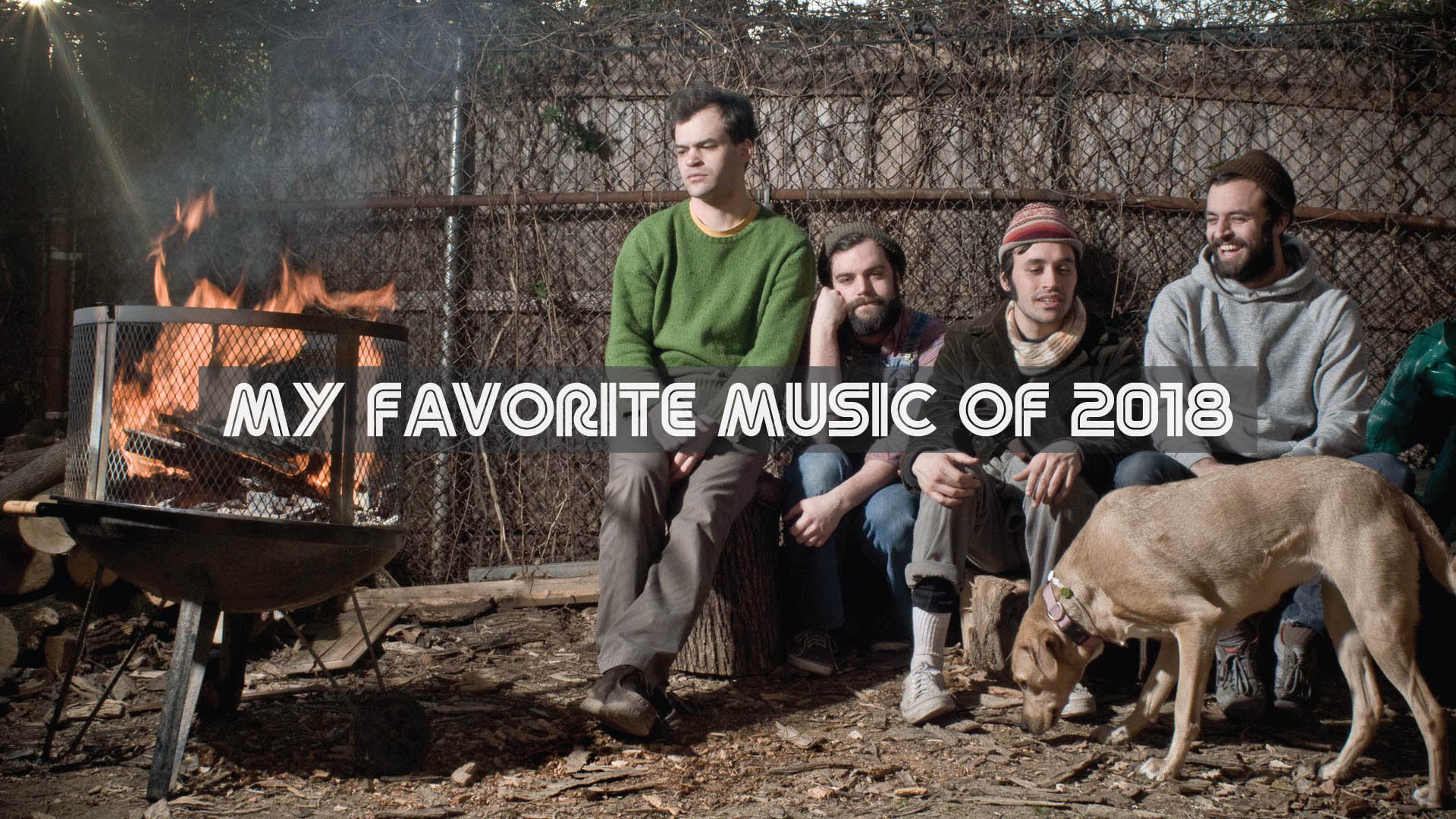 It’s hard for me to believe that it’s already December and 2018 is just about over. I’m not sure if 2018 feeling like it flew by is a good or bad thing but it is what it is. What I do know is that 2018 provided me with fantastic music to help the year flow and jam just as good as any year I can remember. Below are my 5 favorite albums from this year with my favorite track from each album. Let me know your thoughts too!

Metal music has always been near and dear to my heart ever since I started my ’emo’ phase of music in high school. Bands like “The Used” and “Finch” got me hooked to the idea of singers screaming their vocals violently into their microphones and then bands like The Chariot and Impending Doom got me hooked. It was sometime in 2007 or 2008, I think, when I was first introduced to Sleeping Giant and they quickly became one of my most favorite metal bands of all time. Their catalog of music seemed to improve with each new release and then, in 2014, it was implied that they were done and “Finished People” would be their final album. It was so good and I was perfectly OK with their decision… until earlier this year when I heard that they would be releasing a new album titled, “I AM”. Whoa, boy. This album is pure Sleeping Giant and reminds me a lot of their decade old stuff from “Dread Champions of the Last Days” and “Sons of Thunder”. If you enjoy solid metal, you’re really going to enjoy “I AM”. The songs are structurally tight, the lyrics are spiritually inspired, and the vocals will make your ears bleed. Not really, but maybe. My favorite track off this album is track #2, “Second Chance Kids”. It features Matty from the now retired “For Today” and it rocks.

by Sleeping Giant | I AM

I was first exposed to MY EPIC thru a Facedown records sampler that I was given at the Cornerstone Music Festival in 2010. Facedown is, traditionally, a metal-centric label so I just assumed that the track I saw from a band named “MY EPIC” would be metal as well. It wasn’t but it was solid. I honestly don’t remember which track was on that sampler because I can’t find that CD anymore, but I remember being hooked by the intense melodies and deeply clear lyrics lead singer Aaron Stone was relaying to my brain. When their super ‘soft’ album, Broken Voice” released in 2011, it resonated specifically with where I was at in my personal life as a wannabe Christian. I still maintain the “wannabe” title and, thus, Broken Voice is still often jammed any given day of the week. Seriously, I know I’m talking about their latest release but go buy or stream “Broken Voice” and thank me later. ANYWAY — fast forward to 2018 and MY EPIC stole my heart again. With each release the publish, it’s as if they’re experimenting with new styles of music, melodies, harmonies, hooks, etc, etc, etc and it ALWAYS ends up working in my opinion. Their faith and struggles are relatable and their music is solid. “Of Wilderness” is my track of choice off of “Ultraviolet” because, again, it’s extremely relatable to my life, faith and struggles with faith, and observations of the modern Western Church… also, it’s just a solid song!

by MY EPIC | Ultraviolet

If you can’t tell by now, my musical tastes are all over the spectrum. I don’t think it’s because of anything particularly deep about myself, I just like stuff that sounds good to my ears. One album that completely caught me off guard this year was Kanye West’s “Ye”. I’m not stranger to his catalog of music and I’ve enjoyed plenty of what he’s released over the years, but never as much as I have this album. To be fair, there’s actually only 4 tracks (of the 7 total) that I truly enjoy off this album but they are so solid that I placed this album at #3 on my list. Kanye is brutally honest and transparent in his lyrics and has an extraordinary ability to make his words and message flow in a way that is smooth and impactful. The track I chose to share with you is, funny enough, the only track on the album that I would never feel comfortable playing around other people and especially never sing out loud if others were near. The last track, #7, “Violent Crimes” probably drops the n-word a gazillion times. The reason it’s my favorite track is because it perfectly captures the struggle a typical “macho” or macho-compensating male experiences when he goes from “I’m such a baller and play boy blah blah blah” to being the father of daughters. I have three daughters myself and I can tell you that nothing has changed my perspective on the male+female dynamic more than having little girls. I’m honestly crippled with anxiety when I think about them being old enough to date and have their hearts broken by boys who will use the same awful lies and tricks that I tried to use as a kid. Kanye nails it with this track and the first time I listened to it I was on the brink of tears. It’s powerful, to me at least, and I can’t say enough positive things about this track. BONUS — this YouTube video I’ve added is an absolutely beautiful piano-only cover of “Violent Crimes”. Little bit of Joshua Steubing trivia for you — when I’m on the road, away from my family, I get terribly home sick and anxious. This piano cover, along with a slew of others I have downloaded from various cover artists, helps me go to sleep at night in my hotel bed without delay.

I’ve had an extremely long, on-again-off-again, relationship with MewithoutYou. Arguably, they’re in my top 3 favorite bands of all time spanning every genre of music I can think of and the only reason I say “arguably” is because there was a solid 5 year period where I was “protesting” them. I wasn’t really protesting, but I was less than impressed by some of their professed theological views (FYI – I’m OK with different views than my own and still love these guys) and their 2012 and 2015 releases, “Ten Stories” and “Pale Horses”, respectively, weren’t musically appealing to me. I felt like maybe I had grown out of my longstanding MewithoutYou phase that’d been pretty strong since 2014 and then they released “[Untitled]” this year. WHOA BOY is it good. It is vintage MewithoutYou and such a good “come back” album for me that caused me to fall in love all over again. While I was listening to it for the first time, I was mentally taken back to being a teenager in a dingy bar crammed between dozens of other smelly teens and young 20-somethings jamming and shoving to the tunes of a not-super-well-known MewithoutYou at the time. They’re currently on tour and I’m bummed to have missed their Austin date due to being out of the country for work and I’m even more bummed to hear that this is being dubbed their ‘farewell’ tour. I hope they surprise their fanbase again soon with either another tour or, fingers crossed, another album to follow up this amazing one with. The track I picked to share with you is “Flee, Thou Matadors” because it’s such an interesting approach to song writing, presented in a conversation style between Ferdinand and Maria, and the backing tracks to the clever lyrical style are rock solid.

If you follow me on any given social media platform, my #1 pick should come as no surprise to you. I grew up in a house of eclectic musical tastes but soul, funk, and R&B often dominated our household stereo. I’m thankful that my parents exposed me to so many different genres growing up and I’m especially thankful that their love of soul music passed down to me. I’ve been in love with Charles Bradley’s music since first hearing him almost two years ago. His brand of soul music is intoxicating and, while lyrically it should be depressing or, at the very least, saddening (with his songs almost exclusively being about heartbreaks and bad relationships), his music fills me with immense joy. The genre of soul/funk has always done that to me and I hold Charles Bradley at the very top as being one of the very best to have ever done it. Sadly, he lost his battle with cancer in September of 2017 and so I believed his album, “Changes” would have to be his last one (or that they’d do some collector’s or ‘best of’ album, maybe). I was so happy to see Daptone records announce mid-year that they would be producing one final album that would have lots of new (previously unreleased) tracks, cover songs, and a redone version of one of my favorite songs of Bradley’s, “Victim of Love”. In fact, picking just one track off of “Black Velvet” to share with was the hardest to do with this album. I genuinely love every track and probably looped it 50 times before changing music to listen to. I ended up choosing “Fly Little Girl” because, again, I connected to it in a special way as a husband and father of three daughters. It’s a song of encouragement and support that isn’t necessarily lyrically deep but it’s painfully straight forward yet powerfully meaningful to me.